Of Markets and Dollies

A coworker of mine invited me to come to this giant flea market that is (sort of) in our area. It's called Rice's and it only runs Tuesdays and Saturdays. Saturdays are usually a zoo...Laura and I are both off on Tuesdays. So, we decided to go, and my other co-worker/friend Rachel came too.

I figured, despite the fact that neither of them are into Blythe, that they at least had shown interest in my hobby...enough so that they would be willing to take pictures for me for...Blythe Photo Challenge #3! This one was a "Where's Blythe? (a la Where's Waldo) Challenge." I hope Cassie isn't too easily spotted! Click to enlarge it. 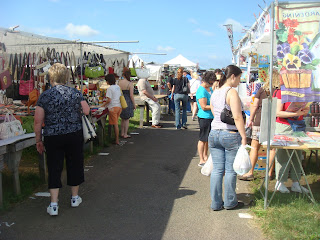 Cassie and I had a great time at Rice's. It was really the first place that I was completely comfortable toting her around and showing her off. When we went to Valley Forge I hid her from the people I ran into (ridiculous, since I didn't know any of them and would never even see them again!)

One of our failed "Where's Cassie" pics was at a stand that had cute hair accessories. As I posed Cass and prepared for the pic, I told the stand owner, "Don't worry, I'm going to get those clips for Cassie." She replied, "They look like they're the perfect size for your doll!" I laughed and said "Yup, SHE is Cassie." Teehee. These little clips were only $1. I will probably buy her the black set when I go back to Rice's. 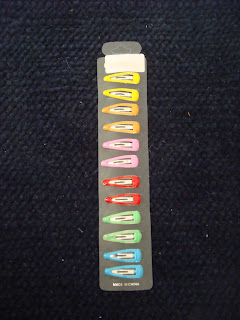 I also got a great summer/pregnancy dress, a shirt for my mom (belated mother's day present) a cell phone charm, and some produce. After looking at all the knockoff Coach stuff all day, I caved at Nordstrom Rack and bought a pair of inexpensive Coach sandals that fit me really well and I really liked. That style sandal usually looks terrible on me, but the soles to the Coach ones were wide enough that my toes didn't spread over the edges of the shoe. Haha. Charming I know. 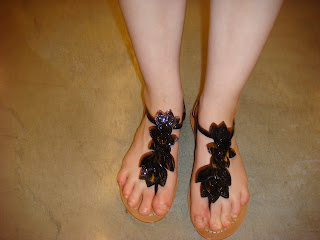 My Dollie Doll Coordinate Recipe book came the other day, and I finally decided to make a pair of jeans from the book. The free flare pattern from Puchi Collective does well for a first pair, but the ones in this book have all the pockets and detail work. I read the pattern and saw that Blythe is 22cm...however, when I googled it to double check, it said that she was 27cm. I went "oh, I must have read it wrong" (my Japanese isn't stellar) I should have had more faith in myself, because one pair of 27cm jeans later, I realized that Cassie is indeed 22cm. The 27cm fits Momoko, who is taller than Blythe. Cassie's jeans would make a great body suit, if I could get them up that high on her. I could barely squeeze her into the pair I made. 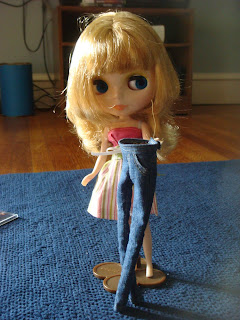 Will hopefully have a successful pair in the near future!
Posted by claribari at 2:56 PM