The Blythe Physical Challenge #9 was "Blythe vs Food" and was supposed to be a photo with a local 'dare eat' a la that show on the food network. A lot of the other group members sort of punked out and just went with fast food (Five Guys is delicious, but not a dare eat...)

I thought immediately of the gordo at Burrito Loco, and while I was too cheap to buy one (especially because I don't like burritos...) I took Cassie and headed down to West Chester.

It was a dual purpose mission, because I needed my B-Lo shot and I had made SAI letters for a sister that needed to get delivered. Tri-purpose if you count that my brother moved in that day as a freshmen!

After dropping off the letters at the music building (which was also the most convenient parking and not nearly as much of a zoo as the rest of campus) I set off to find my brother, Jack. We headed over to Burrito Loco, and he told me he would "freak" if I took "that doll" out of my bag. He's no fun.

My sister and friend, Kristi and her husband are much better sports. Kristi was moving her little sis who is Jack's age in that day as well, so she and her entire family met us for lunch. Kayla, like Kristi, loved Cassie at first sight, and wanted to hold her and change her eye color. :) Too bad I don't have another little sister!

After snapping a shot of Cass with Kristi's burrito, I elected to put Cassie on this giant fake cactus that is right near a big 'Burrito Loco' banner. This attracted some attention...When I got over to the "Wall of Fame" the cashier made it a point to check out Cassie. She said she wasn't sure what she was (I don't think she knows even now...haha) but overall Cass was well received in West Chester. Here is the photo-montage of my labors... 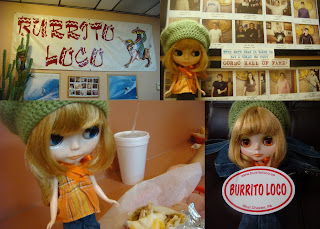 Posted by claribari at 6:22 AM