I got it into my head awhile ago that I wanted to make steampunk for Cassie. I'm not sure why, but I did. I saw tiny watch gears at Rice's the last time I was there and fought the urge to buy them...but recently found myself wanting to go back to find them.

My friend Robert and I went this past Tuesday, and I brought Cassie-belle. It was the first time Robert met her, and he took the whole doll-thing pretty well. ;) By the time we went in 'the barn' he was like, "Oh, put her over here with this mummy..." and "over here with the pumpkins all around her..." :) 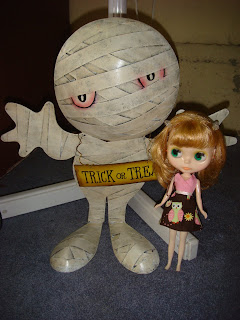 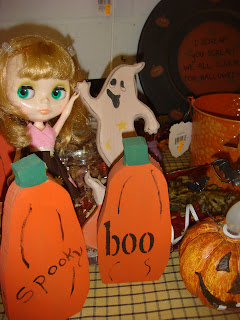 We had fun shopping and I told Robert about the Blythe Physical Challenge to find a funny sign...Well, Robert found one alright. It is so Blythe appropriate too! I want to submit it but make sure the language is okay (it does say B*tch, afterall) 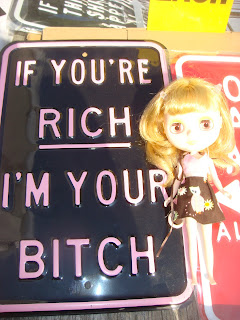 I bought Cassie some black and white hair clips. I may have to decorate some of them a bit, as they are rather plain ;)

After Rice's we went to a farm market near where we live and picked zinnias. Here is Cassie holding them. Mine wilted, and Robert told me it's because I was choking them! It's hard to hold a doll, a camera, and a bunch of flowers...not to mention being 8 months pregnant, struggling against the heat, uneven ground, and poor footware choice (flip-flops) 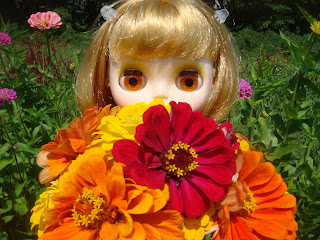 Overall a productive day...as I also did some Blythe furniture work! More to come about that in my next post!
Posted by claribari at 6:43 PM