I have a new dolly sewing love!

After my success with the Simplicity pattern, I pulled out my Dolly Dolly Coordinate Recipe Book and whipped up a new pair of jeans for Cassie. It only took four previously failed attempts (one that was the completely wrong size, if you recall) to get it right!

I also used the t-shirt/long sleeved pattern that was in the book and some rib knits to make Cass some adorable tops. It has gotten so chilly out that I can't have the poor thing in sun dresses! 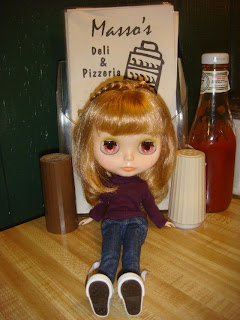 Here is the turquoise shirt...annnnd, some new headbands! I followed the tutorial that was on the TIB forum and they came out pretty well for my first batch! Four headbands for a dollar :) 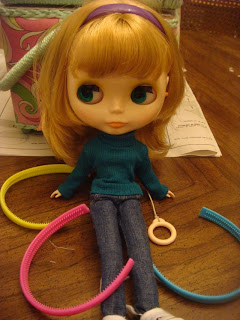 Next up, I want to make either a jacket or a hoodie from the Dolly Dolly patterns. I am also attempting to organize all my teensy patterns so that they don't get lost/I don't have them floating around in my fabric box.

Since we are on the topic of fashions, I will end with this awesome ensemble I bought from Jokunda on Etsy. I had been eyeing them for sometime and finally caved over a month ago to get this for Cassie. The top is crocheted and the jumper is felted knit. I absolutely love this outfit! 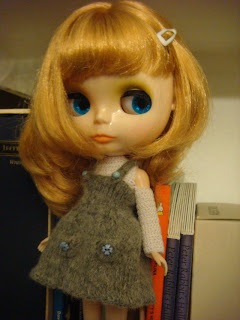 Posted by claribari at 6:18 PM