Bonding with your Dolls

I know it sounds crazy to anyone who isn't part of Blythe-mania, but it's true. You need to bond with your dolls. I was constantly seeing dolls for sale on the forums with the simple explanation: I couldn't bond with her, so she has to go. I thought to myself, "Why would you buy a doll you didn't like to begin with?!" but that isn't quite what it is.

Even when I took the plunge and ordered Cassie, waiting for her to arrive I thought, "that's just crazy. How exactly do you bond with a plastic toy?"

I, of all people, should know better. Afterall, I find myself overly attached to clocks (there was a small meltdown involved when my mom changed the one that had hung in our kitchen all my life) I have always had my 'favorite' dolls and toys, and of course, my beloved Kiri.

With Cassie I didn't even realize it had happened until the other day. I didn't actively think about bonding with her; I just took her out and about with me so I could take her picture for my flickr groups. If you read this, you know I'm part of the Blythe Challenge, a group that demands you take your dollies public. I also embarked on 365 Days of Blythe, where it is a pic a day for a year with one doll. Since I only had Cassie at that point, she was my natural choice.

When perusing the forums I found a thread about how to bond with a new girl that it just isn't happening with. The suggestions were to take her out, photograph her, customize her, do the 365 challenge, etc. Some people commented that their first doll was effortless.

I thought about that. Cassie is certainly my favorite. I didn't mean for it to be that way...it just is. I naturally grab her to go out with me when I run errands and such.

Hana never goes out, because she is in pieces...but Hana also has her own charms. Due to the custom work that I have put into her, I look at Hana with awe and think how pretty she is and will be. I think I have also bonded with Hana.

Then there is poor Yula. I received her on my birthday; two days before I was induced and had Riley. I was proud of myself for putting in all of her new eye chips, sand matting her, and fighting with her lip painting after I had the baby. Somehow though, the customizing didn't do the trick on her. I sat her on the shelf, the window sill, the dining room table. I changed her outfits and her look, but she didn't seem to have the personality I thought she would.

The other night I ran out to get a pizza. Thinking I would stop at the pet store, I thought about taking Cassie. Remembering my lack of time with Yula, I took her instead. When I got into the car that "Like a G6" song was playing. Not the best of the music world, but fun to rock out to in the car. Before I knew it, Yula was throwing her hair around with me. Pink's new song, "Raise Your Glass" came on next, and the rockout continued.

When we got to the pet store it was closed. Bummer. No fun pictures of Yula with budgie birds or mice. We headed to Papa John's, but the pizza wasn't done (hubby had planned on me shopping the pet store first so he waited to order) I went back to the car to grab Yula so we could wait. I definitely felt her fun and pretty silly mood and personality. Seeing the "Now Baking" sign, I was amused and inspired. Yula got the joke. ;) 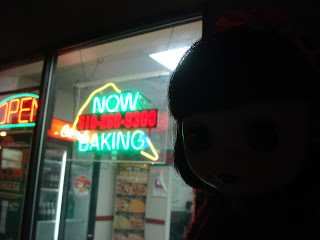 I also snapped her picture inside while we were waiting. We attracted some interested glances from customers and employees. When the pizza was finally up, the one guy brought it around the counter to me so he could get a better look at Yula! 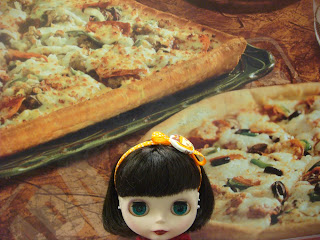 When I got out to the car I looked at Yula and said aloud, "If we hear Ke$ha on the way home, it's official." We R Who We R came on as soon as I pulled out of the lot. :) Yula and I are officially the coolest. :)
Posted by claribari at 1:53 PM