...And Then There Were Two

"New girl" arrived rather unexpected today! She was mailed on Tuesday, and it is only Thursday! Most excellent...

Cassie and I got her cleaned up (literally, her sand matted little face was all dirty) and changed her into a new dress (she came in the red thing in the first pic I put up) Brushed her hair a bit, and then gave her a cute little clip to hold her bangs. She looks much better here, than she did upon her arrival! 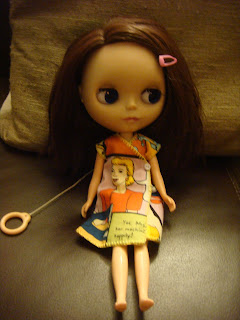 Looks can be a bit deceiving...her eye mech was dirty as heck. I think they didn't take her apart to sand. Her hair is very gritty and dirty. I'm contemplating washing it and cutting it before her new scalp arrives, if just for the experience. That's the other thing...her hair is so choppy and uneven it kills me. I discovered her part, and it goes the opposite of how I envision it going...so I will start anew. Her hair plugs are very, very sparse. It must be an ADG thing. Cassie has thick, gorgeous hair.

We named her Hana, after playing with several names. Hana is getting a very new look soon. I went on Coolcat and ordered two wefts of wine red/black hair (it has black highlights!) That will be put onto a brand new, blank Coolcat scalp, with the plug pattern modeled after Cassie's (Though Hana is getting a side part and likely short hair.) Along with those items are new chips: Enlarged pupil in a dark grayish purple, Sakura chips in a dark blue, oblique angle in brown, and custom flat with a green hue. I plan to make her some kickass customs, and probably will spruce up the eyeballs of the enlarged pupils. For good measure, I threw in new eye lashes (they were very cheap) and a green sparkly pull ring, which is for Cassie. I will use her discarded ring for when I do sleep eyes on Hana, and get Cassie a second ring when I finally do sleep eyes on HER. Whew!

Also found out that Hana has had an arm transplant. Either that or ADG sucks at matching skin tone and makes their arms of totally different material (aka, I'm reasonably sure they aren't her arms) I'm debating getting her a Takara body from the forums or going for an obitsu or Neemo, trying on her, and then maybe donating to Cassie if I like it. :/ Gr. The Takara body will wind up being twenty with shipping from the UK, but the same seller is offering a clover stand for a dollar, which I also need. Decisions.

Hana doesn't seem as rough around the edges as I first assumed she would be. She has no makeup, and half her lip color, but I meant more figuratively I guess. I thought she would be a tough little cookie personality-wise, but she isn't really. She and Cassie seem to be getting along, which is something else I didn't quite expect. I suppose when I finally make "Cassie's House" I will have to include somewhere for Hana to crash. She can be *that* friend.

Speaking of friends (and I know this post is really long...I'm typing a mile a minute, and you KNOW I don't edit) my best friend and SAI sister Kristi came over. Not only was she *not* freaked out by Cassie, she actually liked her a lot. I went through all my blythe geekdom with her, and she was there when Hana arrived this afternoon. Kristi understood Blythe personality so much, that when I mentioned Cassie's she didn't even bat an eye, and told me she completely knew what I meant! 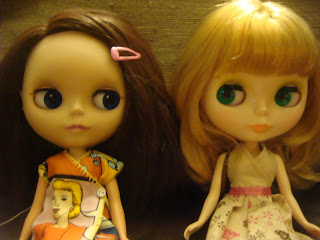