I have been thinking about doll names lately. One train of thought led to another, and suddenly I realized that I have weird patterns to doll naming; especially as I acquire more and more dolls. Cassie was named right after her doll name; Cassiopeia Spice. I will admit, I was not very original, but it definitely seemed to suit her.

Next came Hana. I reached out to my lovely anime genre and thought of all the cool Japanese names I could use. I finally settled on Hana, short for Hanajima, a character from Fruits Basket.

Yula is named for a former bass guitarist in one of my favorite bands, The World Inferno Friendship Society. Yula's whole theme is based around them. She was my second custom that I created, painting album art and song lyrics on her lids, and styling her to be a rockin' punk girl. My best friend Jeannette named Fawn. She listened to me ramble a bunch of awful names (none of which I even LIKED) and just said simply, "Her name is Fawn." Good call, J. That has worked out well. :)

Autumn was more a vibe on letters. A lot of times I get a feel for which letter a name should start with, and as Autumn is such a natural looking girl, she fell into her name after a vibe told me she liked "A" names. I really wanted to just call her Azzie (Aztec Arrival) but thought that might be kind of lame? Next came Elsa. Elsa was named before she made it to me. She is a Rosie Red, and her namesake, the rose, led me back to my fraternity. We are a music organization and there were seven founders. I thought through their names, and wasn't wild about any of them (despite my love of Minnie Davis Sherrill, I was NOT naming a girl after her!) So then I thought, "There must be someone within the ranks that has a great name." It didn't take much searching (I know a lot of the history by heart) to recall a woman who asked NOT to be named a founder. She was the daughter of the dean, and did not want to be counted. Her name was Elsa. :)

Finally, my Kozy Kape. That beautiful hair just reminded me so much of my fave X Files gal, Scully. I didn't want to name her Scully, so I settled on Gillian. It suits her. I call her Gilly sometimes.

I have found that girls that I have a lot of trouble naming are generally not "keepers." I had a custom that I named Kylee, but I kept bouncing back and forth between Kylee and Kaylee and all sorts of names and never felt "final" with her name. The same was true for Lilah, a T42. I wasn't sure if it was Lilah or Leighla or Leia...and finally I wound up selling them both.

The thing that worries me and makes me a bit sad to think is that the beautiful custom that I won in the Blythe Con raffle has been more like those last two. I searched for names, tried to settle on Calliope, but it just doesn't feel right. I can't seem to find her name, which to me means she isn't meant to stay with me. 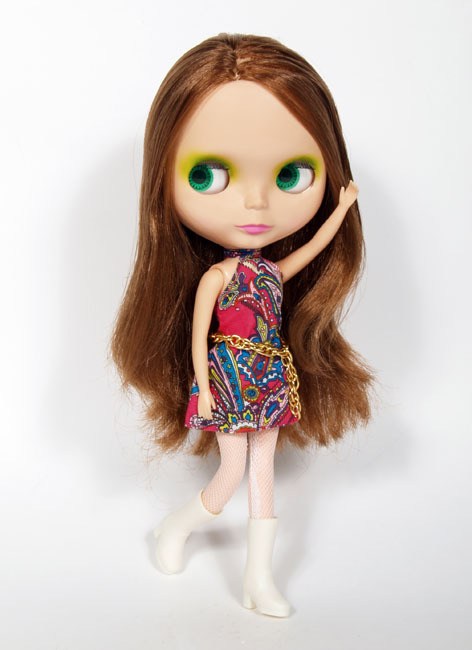 Conversely, I have been fantasizing about a Parco, and started going through some favorite teacher names. I think if I get a Parco she may be a Donna (2nd grade teacher)...funny because I am not wild about that name, but it would work on Parco for sure. I also like May (an art teacher I had) which then led me to June...which would just an adorable name. Funny how I can settle on a name for a girl I don't even own...
Posted by claribari at 6:59 PM