I found them at Toys R Us the other day, along with most (maybe all?) of the new wave releases. I had to have these three, and fought the urge to buy a few others. 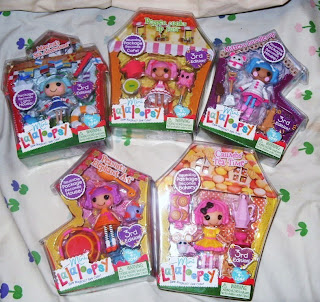 I really like Jewels' bubblebath (not pictured) because the set is different from the other Jewels releases. The Marina's Beach Day outfit looks to similar to her regular one. They just released Pepper Pots and Pans, and now the 'remake' includes a different outfit, and a green soup in a red pot instead of an orange pot. I certainly don't need two of those! I do like the newest release outfit better than the first...so maybe I will pick that one up someday. Mittens is also very similar to her first release, but Peanut at least has some new accessories. Crumbs Tea Time doesn't make sense to me after the release of her Tea Party set...

Today's mission (amongst many others) is to find a little dollhouse I used to have for my Baby Buddies, and turn it into a Lala house. ;)
Posted by claribari at 5:42 AM