I am twenty-four years old, married, and expecting our first child at the end of October. You can probably imagine my husband's surprise when I told him that I wanted a doll. No, no, not just ANY doll...I had to have a Blythe Doll.

I first met Blythe via WillyNillyWaterlily. I read every post she had written about amigurumi, and I started to see this wide-eyed, creepy looking doll she called Loovee. I didn't really know what to make of this entity. I looked into Blythe and saw that the dolls are really expensive. That sealed it for me; no way, no how, did I want anything to do with that creepy, pricey doll.

Blythe continued to pop up along my web travels. I didn't think much about her, until one day, I began looking at the different doll models. As soon as I caught sight of Cassiopeia Spice and read her 'history,' I had to have her. 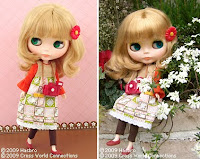 Isn't she super cute? (It's okay if you don't think so...it'll hit you in a year that you love her!)

I grappled with the thought of spending $100 on a doll, and I consulted the hubby for help. He was extremely NOT helpful. He kept telling me to do what I wanted to do...what I thought was best. Well...I didn't think it was a great idea to spend money on a doll...but I couldn't get her off my mind. She was all I thought about...so finally, after some convincing from my co-workers (who are awesome) I ordered Cassie.

The bad news...she is coming from Hong Kong. I knew it would be a long wait...but I figured it wouldn't be too bad. The seller said she ships within three days. So I sent her a message to see if Cassiopeia had shipped...and it is Golden Week. :( I paid on Sunday night...she won't ship until Friday. I probably won't even receive her next week.

So in the mean time...I might have to start making some dollie stuffs. :)
Posted by claribari at 2:46 PM