Today was ick. I did a ton of housework and then ran some errands. Cassie kept me company (though I was too chicken to bring her into any stores...plus it was raining!)

I got a 3.5mm crochet hook to try this hat I want to make for her. Also picked out some cute yarn to make said hat out of...Purchased some Krylon Fusion plastic paint for when the kitchen gets here...and ordered a Dolly Doll Coordinate Recipe book to get some more patterns for doll clothes. Due to the dreary weather I nixed the trip to JoAnns for tshirt fabric. If I feel so ambitious after a second pair of jeans, I will just cut up one of my old ones.

I am already fighting off the urge to buy more dolls. *sigh* I like all of the expensive ones...Princess Milk Bisquit de Qpot, Le Jardin de Maman, Veronica Lace...I would also like a Punkaholic, though she doesn't seem to be too expensive at least. I also really want the new release, Kiss Me True. She has silvery hair and is dressed so chic!

Cassie met Cat and hung out with her for a bit while I did some overdue ironing. 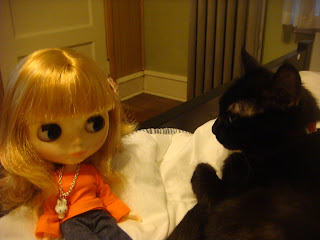 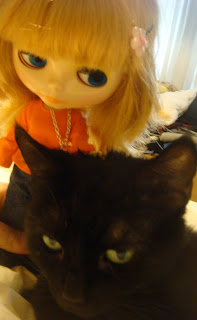 While I did more chores, Cassie curled up with a cup of coffee and a book, and bid on a Kitchen Littles refrigerator for her new kitchen. Girl has the life! 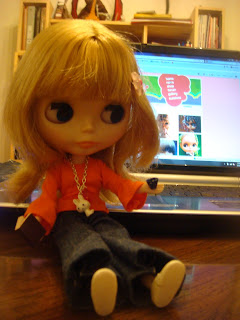