So, I resisted the urge to post an emo/angry/super depressed post about how on Friday I waited and waited for mail before I had to leave to work. I got home after eleven and found to my dismay, Cassie HAD been there, but they wouldn't leave her because she was sent registered mail. Glenn pointed out that it's probably much better they *didn't* just leave her, as we were both out until late with work, and anyone could have come along and taken her!

I waited the agonizing weekend, because my post office is closed all weekend. Monday morning I got up, got hubby off to work, and raced to the post office. I live in a nice neighborhood in a relatively nice area of Norristown. My post office, does not. 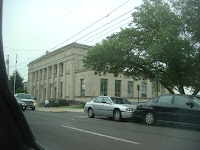 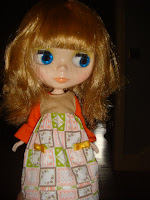 I had to take two laps around the block before I could find parking (street + meter...ick) I raced inside to find...a line. It is the post office after all. The happiest sight of all was when a second employee opened a window and took me! The package she handed me was very...pink! 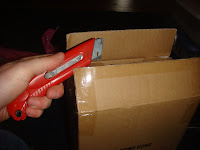 Cassie was very impressively packed. She was wrapped in pretty paper, bubble wrap, the shipper box, and then Cassie's box. I used my lovely IKEA box cutter to help free her. All of the tape and twisties and plastic inside of her box were such a pain! I didn't want to destroy the box, so I tried to be careful. I liberated Cass and her shoes, but left everything else to later. 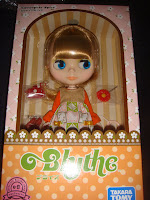 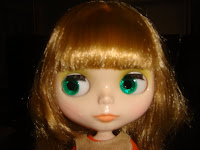 It was so neat to pull her pull string for the first time. I'd actually never seen a Blythe other than in pictures and of course online. I had a rough idea of Blythe size and proportions based on patterns I'd seen, and knowing that they are semi-Barbie sized. A lot of Blythe lovers I follow have noted that the dolls are never quite what they expect, but in a good way. I think Cassie was exactly what I expected, and I am in love~! She is so cute and different as far as dolls go. As soon as I saw her I thought "I must get more!"

I of course stripped her before taking too many pics of her in her stock outfit, so that I could try on the things I made for her and the things I bought for her. The jeans I made fit okay, but they have construction issue, so I didn't want photographic evidence of that! The first dress I made was a bit small in the shoulders, but the second...the strawberry dress, fit! I must get her some tights to wear with it! 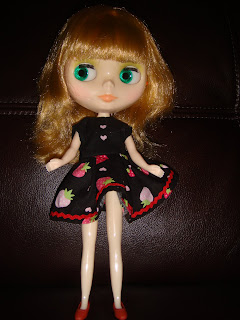 Unfortunately the bear hats that I planned to pop into my Etsy shop are a bit on the small side. They are just a tad short, so I can probably add to them so they will look right. I will post pictures once I fix them. I was pretty disappointed by that, but Cassie looked so cute in her new bunny necklace and hair pin that it cheered me up! She convinced me to post a ton of her pictures before work so that everyone could see her. Here she is helping me hook up the camera to the laptop! 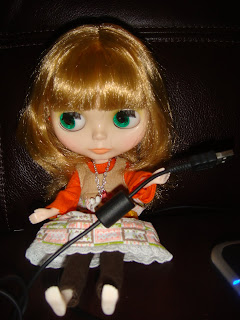 Cassie gets to lounge around for the next eight hours and get used to her new home, while I go slave away as a kitchen planner. With any luck, HER kitchen will arrive today! I caved and bought the blue vintage one. I have a million painting plans for it so I can't wait! More from us later! <3 xoxo
Posted by claribari at 7:06 AM