In my quest to do many things Blythe, I joined a Flickr group called "Blythe Physical Challenge." At first I thought it was about customizing Blythe, and I had no interest at all (I don't want to mess with my only doll!) but, when I read more about it I realized that the challenges were to take photos of Blythe in all different places. The first challenge, which I missed, was to take pics at the grocery store. The second one, which appeared to be current, was to find a local historic landmark. It seemed like a good idea on a Friday night with nothing to do, so I packed up Cassie and my dying camera and raced over to Valley Forge. 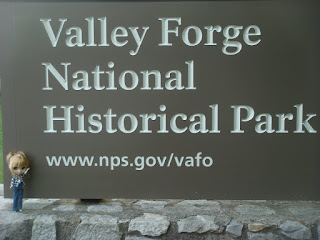 The thing about Valley Forge is that, I've never been there, despite the fact that I have always lived within thirty minutes to an hour of it. I have driven through on 23once or twice, but I have never visited the park or seen George Washington's Headquarters or anything like that. I began to realize as we drove around in search of worthy landmarks, that my Blythe doll hobby had reached a new level. It was getting me to do things and experience things that I wouldn't have otherwise. 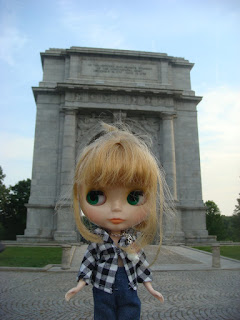 Cassie at the National Memorial Arch, which was dedicated to the officers and soldiers of the Continental Army. The Arch was constructed between 1910-1917. We met some folk from Indiana. Seemed nice enough, until they gave me some anti-government pamphlet and told me every good American should read and familiarize themselves with the content...

We wound up exiting the park three separate times (on three different roads, I might add) before finally finding George Washington's Headquarters. 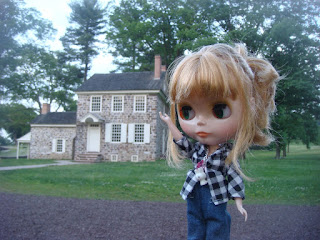 Headquarters was a newly constructed home that belonged to a man named Potts. Washington and the army paid Potts for the rental use of his home, as they did not believe in forcing civilians to quarter troops. The building was renovated last year. I like this shot of Cassie on one of the windows. 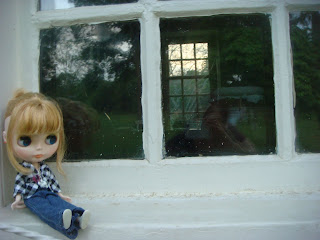 Last, but certainly not least, I wanted to find a cannon. I wasn't even sure if they had cannon, or if I would be able to fit Cassie inside of one if I did find it, but that was my goal. On my exit route, I realized that the Washington Memorial Chapel had multiple cannon adorning the front. Why a church would have cannon is beyond me, but I was delighted. With what little battery power and sunlight I had left, I got my shots! (pun intended?) 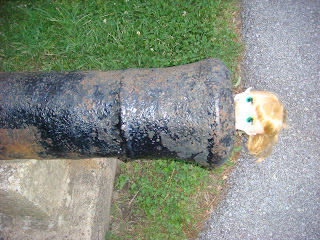 Unfortunately I missed the deadline (by like an hour) to get a pic in the pool on Flickr, but I hope you all enjoyed the Valley Forge Cassie pictures!
Posted by claribari at 5:00 AM